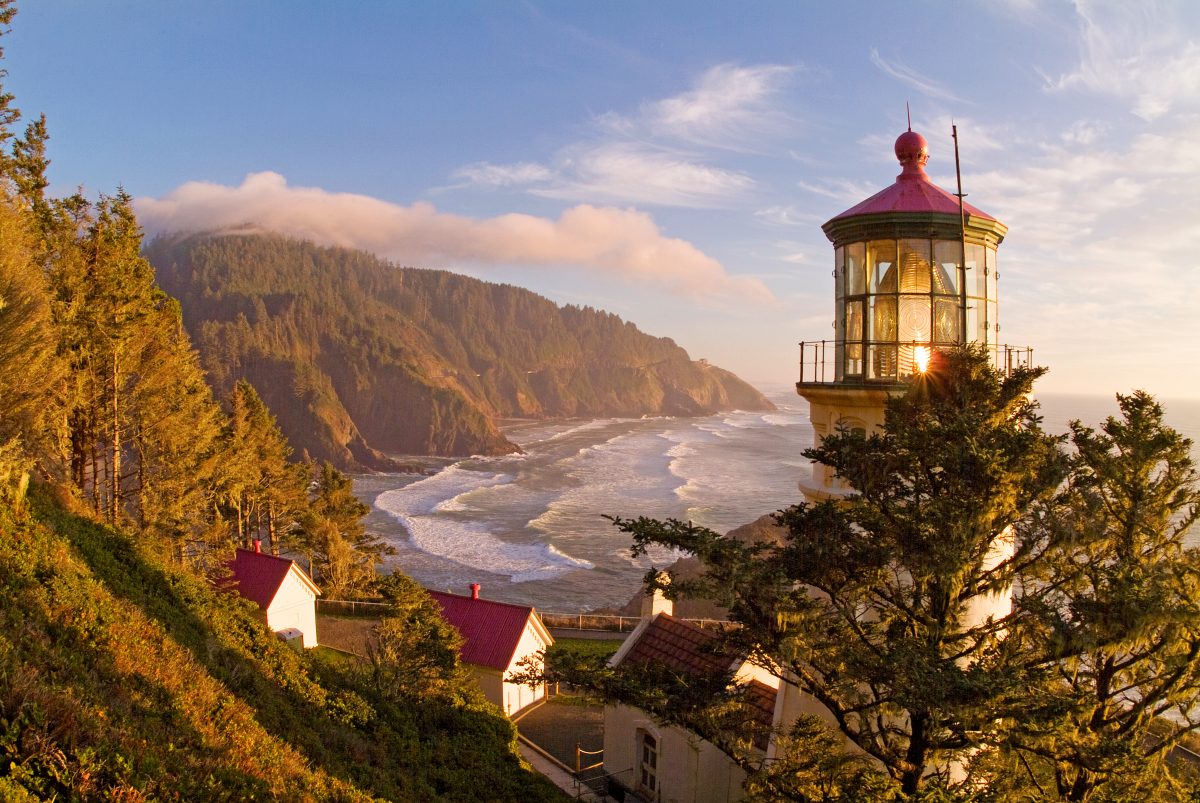 What makes a visit to the Oregon Coast so great is that there’s so much to see and do and it’s pretty easy to see it all on one memorable road trip thanks to the easy coastal route from the tip top of the Beaver State down to southern Oregon.

From a glamping standpoint, there are several stops along the Oregon Coast road trip route that allow you to take the time to drive the coast and stop off for a night or two to explore the quaint towns and great beaches and all there is to see and do there. Pacific City in Cloverdale would be the northern most spot for accommodations, followed by South Jetty, in Florence; Seaside in Seaside; with Whalers Rest in South Beach being the southernmost spot to stay. All are conveniently located to the area highlights and offer a mix of cozy cabins and yurts.

After settling in to your glamping accommodation, check out these 5 things to do on the Oregon Coast.

Lighthouse Tours: There are 11 remaining lighthouses along the rugged Pacific coastline in Oregon and several allow tours. One great way to see these structures is a drive along the Oregon coast, taking photos when you can and visiting where allowed.  A great map of the lighthouse’s locations can be found at theoregoncoast.info/Lighthouse/Map.html. A click on each pin provides location details and whether the lighthouse is open for visitors.

Cape Perpetua: This scenic area is like a quick primer on all things Oregon. There are the rugged cliffs, the waters of the Pacific, tide pools, and marine life. Don’t miss Thor’s Well, an old collapsed sea cave that is continually thrashing and spewing the ocean waters. Heading about 15 miles south of Cape Perpetua, another must-see is the privately-owned Sea Lion Caves that serves as a wildlife preserve and bird sanctuary. In winter, hundreds of sea lions shelter in the cave and when spring arrives, they move outside to the rock ledges.

Three Capes Scenic Route: This route connects three of Oregon’s famed capes, Cape Meares, Cape Lookout, and Cape Kiwanda and provides road-trippers an off-the-highway path full of all kinds of delights, including beach views, forestlands and dairy pastures, plus the little towns and sights along the way. In total, it is a 40-mile loop and downtown Tillamook is the best place to start this scenic drive.

Culinary Fun: Seafood is the name of the game here, but there are also opportunities for some cheese and ice cream to fill out the culinary adventures when you’re driving the Oregon coast. The Tillamook Creamery in Tillamook is a great place to start the dairy adventure and is open 7 days a week. Did you know Oregon is the only state to grow marionberries, which are considered the king of blackberries? According to onlyinyourstate.com, one of the best places to enjoy a piece of marionberry pie while in Oregon is in Newport at the Chalet Restaurant and Bakery. From a seafood perspective, oysters, salmon, and crab are just of few of the fresh fish found here. If you’re visiting Cannon Beach, check out Ecola Seafood, which has proudly served up seafood to the community since 1933.

History and Highlights: Starting north in Astoria, there is the Lewis and Clark National Historical Park, which commemorates the historic expedition of these two explorers, as well as the Fort Clatsop National Memorial. The Heceta Head Lighthouse, standing since 1894 and Oregon’s most photographed lighthouse, is just north of Florence. The charming town of Seaside has both the Lewis and Clark Memorial statue and the historic Seaside Promenade, which provides a great place to stroll along the ocean and view the town. And Cannon Beach has the iconic Haystack Rock, the photo worthy 235-foot sea stack.